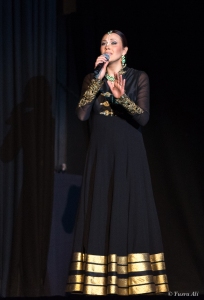 Ananda Monet is a singer and songwriter.

Ananda grew up in a family of musicians in Russia. She studied bhakti yoga and mantra music meditation and has cultivated a taste for the ancient practice of singing sacred Sanskrit mantras, called kirtan.

Having learnt Russian traditional music at college, Ananda discovered a link between Russian and Indian cultural roots, which has influenced her style profoundly. Her singing blends the two traditions in a unique way, bringing together the passionate notes of the Slavic folk and the beauty of the Eastern ragas. She released her debut Russian language album in 2007.

Ananda now lives in the UK where she contributes to many mantra music projects such as Kirtan London and events as London Wellbeing Festival (Mind Body Spirit), Mantra Lounge and Veda London.​ Her latest album Inevitable Time was launched in May 2015 at Camden Centre accompanied by Samadhi Dance

You can find out more about Ananda Monet on the website anandamonet.com

Listen to Inevitable Time on Soundcloud